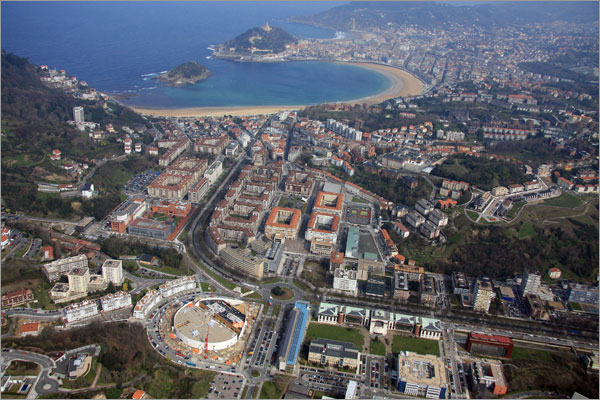 URGENT! Call for a one-year contract for a Post-doctoral position within the IAS Research group in Donostia/San Sebastián

Applications are welcome from researchers holding a PhD degree interested in this contract, which is associated with the Research Project IT590-13 (coord.: Alvaro Moreno) developed by the IAS Research Center. The candidate is asked to have an specialization in Philosophy of Biology and familiarity with the issues and the approach of the research lines specified in the aforementioned funded Project (see below an extract) will be valued.

Along with his CV, the candidates are also asked to submit a brief research proposal (around 1000 words) according to those research lines. The grant consists in a 1-year research contract to be held at the University of the Basque Country. The holder of the contract will be expected to develop research in the specified lines. The call for this contract is issued by University of the Basque Country and details about how to apply are already published here in this link (in Spanish and Basque only).  Further inquiries should be sent to Alvaro Moreno (alvaro.moreno@ehu.es) or Arantza Etxeberria (arantza.etxeberria@ehu.es). The deadline is tight, just from the 17th to the 25th of September.

RESEARCH LINES OF PROJECT IT590-13

Overview: This research theme concentrates particularly on one central strand of the philosophical work of IAS, namely the idea of autonomy from the biological.

1.a Autonomy, levels and mechanism

Summary: This research sub-theme concerns the analysis of conceptual problems related to biological and organization, from the perspective of recent scientific research. This theme aims to naturalize several central problems that arise in explaining and understanding the ontology of life and mind. For example: biological function; teleology; normativity; intentionality; agency; the role of form in explaining biological function; the role of constraints in causality, and in the constitution of systemic, hierarchical organizations; mechanism and causal structure in the context of autonomous systems; and also other key notions such as emergence; hierarchy, complexity, levels of organization; functional integration.

Explore the tensions between the notions of autonomy and hierarchy; it is not easy to reconcile the autonomy-based perspective with the idea that complex organizations are typically hierarchical, and constituted at multiple levels

Clarify the notion of mechanism in this context, and the type (or types) of causality at work, the nature of the relationship between levels in such mechanisms (emergence, downward causation), and the notion of a constituent part

Examine the concept of biological function and its origin in natural systems, compared to artifacts. Clarify the relationship between form and function

Study the relationship between mechanistic and functional forms of explanation

Another objective focuses on the study of failures / malfunctions and disease, exploring when and whether a mechanistic analysis of disease, as malfunction, can be derived from functional explanations of the organization of the individual organism

Finally, an important issue is the relationship between autonomy and agency, considered at the basic level applicable in animal evolution. This point is also important because it builds links with the objectives in the following sub-theme

1.b. The origin, nature and evolution of individuality in biology

Summary: This sub-theme addresses issues to do with the classification of living entities; individuality and natural kinds; single and multi-cellular organisms and individuality; forms of biological organization. In this theme, we particularly aim to study such issues from an evolutionary perspective: living beings are entities which emerge through evolution, and whose organizational and cognitive complexity should be understood as being evolved. Given that we here concentrate particularly on contingent and historical explanation, where the previous sub-theme centers on self-organization and complexity from an a-temporal point of view, an important challenge is to investigate how this and the previous theme should be related.

An investigation of the contributions of ‘evo-devo’ to the analysis of the concept of organism.

Concerning the ontology of organisms, analyze whether any concept of natural kinds (for instance, the homeostatic property cluster natural kind) could address an appropriate and explanatory characterization of organisms as individuals.

Consider the question of how we can conceive of multi-cellular organisms as integrated, autonomous individuals, given that they are composed of autonomous parts (namely cells). How can we understand the concepts of autonomy and normativity in such a composite form of individuality?

How should we understand and deploy the concept of information within autonomous individuals, both from the point of view of genetics and of cognition?

How can we understand evolution from basic biological agency to more complex forms of agency?

Summary: The activities in this line aims to contribute to a better understanding of biological organization. It will be divided in three main sub-lines of work, involving different members of the group and also different collaborations with external researchers/groups: 1) Development of ‘in vitro’ system models. Continue with the experimental work of characterization and analysis of the basic biophysical properties of prebiotic compartments (Rendón et al. 2012). 2) Development of ‘in silico’ theoretical models of protocellular systems. Again, continue with the type of work that we have been doing in the recent past (Ruiz-Mirazo et al. 2011; Mavelli & Ruiz-Mirazo 2013), with a new emphasis on exploring agency at that minimal level, as well as on possible mechanisms of regulation that could play a crucial role in the stability of proto-biological organizations.  3) Conceptual analysis and study of the philosophical implications of the previous two sub-lines. This is conceived as a double-way process: extracting general conclusions from the ‘empirical research’ (in vitro and in silico), but also trying to be constructive in the design of new experiments to carry out. In particular, in this context we aim to tackle not only aspects that have to do with organizational structure of protocellular ‘autonomous’ systems (emergence of functions), but with their agent and self-regulatory capacities, as well. Different pieces of evidence seem to support the hypothesis that without a minimal capacity of regulation (both internal and external), prebiotic systems of this type would not actually be able to achieve the necessary stability to maintain themselves in far from equilibrium, precarious conditions and develop into cellular proto-metabolisms.

This set of different activities proposed are planned to take place in parallel, in a way that the results of each of the lines can complement –and be complemented by– the work carried out in the other ones. It is an advantage, in that sense, that we already have some research experience in each of those lines, and they are, in fact, currently running. Therefore, this allows us to have our own, independent program to tackle the issues at stake from different angles and with different methodologies. In addition to that, of course, we need to follow closely the advances that are and will be taking place in the field of synthetic biology, in particular regarding protocell and minimal cell models, both in computational and experimental environments (Solé et al 2007; Mansy et al. 2008; Walde 2010; Gibson et al. 2010; Noireaux et al. 2011), with the final goal to determine to what extent the notion of autonomy is relevant in this context, and how it should be interpreted (Etxeberria & Ruiz-Mirazo 2009; Ruiz-Mirazo & Moreno 2012).  In brief, we envision that the variety of synthetic approaches now emerging in biology will enlarge the epistemological basis required to develop a more meaningful and general theory for ‘systems biology’, including surely the central concept of autonomous organization.