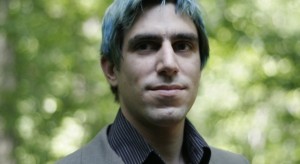 The IAS-Research Center for Life, Mind and Society and the Spanish Society for Analytic Philosophy (SEFA) invite submissions on any aspect of the work of the invited guest for the XXIIth edition of the SIUCC, Jesse Prinz, for presentations at the conference, to be held in San Sebastián on September, 6-8, 2012. Check out all the information about the event at http://siucc2012.ias-research.net.

JESSE PRINZ (B.A. New York University; Ph.D. University of Chicago) is Distinguished Professor of Philosophy at the City University of New York, Graduate Center.  He is also director of the Committee for Interdisciplinary Science Studies there, and he has held appointments at the Philosophy-Neuroscience-Psychology Program at Washington University in St. Louis, the Center for Advanced Study in Behavioral Science at Stanford, California Institute of Technology, the University of London, the École Normale Supérieure in Paris, and at the University of North Carolina, where he held a named professorship.  His research focuses on the perceptual, emotional, and cultural foundations of human psychology.  He is author of Furnishing the Mind: Concepts and Their Perception Basis (MIT, 2002), Gut Reactions: A Perceptual Theory of Emotion (Oxford, 2004), The Emotional Construction of Morals (Oxford), Beyond Human Nature (Penguin/Norton, 2011), and The Conscious Brain (Oxford, 2012), along with two edited volumes.  All of these books bring research in the cognitive sciences to bear on traditional philosophical questions.  Prinz?s work is a contemporary extension of the classical empiricist tradition in philosophy, which emphasises experience, rather than innate knowledge and disembodied, amodal representations in thought.

CALL FOR CONTRIBUTIONS: The Organizing Committee invites contributions on topics related to Prof. Jesse Prinz’s work. Extended drafts (not less than 2000 words) should be sent to the coordinator of the workshop, Agustin Vicente (gusa@euskaltel.net), before May 10, 2012. The organization will cover accommodation expenses for authors of accepted papers. Authors of accepted papers will be notified before June 10th, 2012.